This Karmann Ghia cabriolet was bought to us for a respray but as with all good paint jobs the car needed some restoring first. 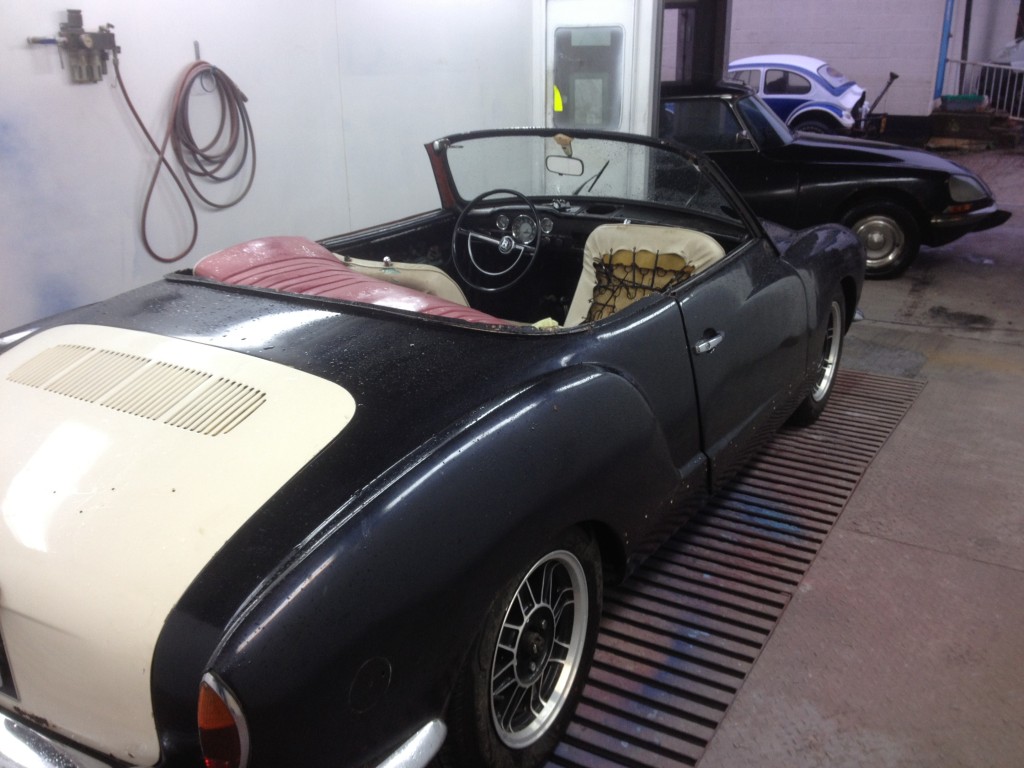 Being a cabriolet the body does not have the strength of it’s coupe counterpart and as such the body had sag like a banana leaving massive Gaps at the rear of each door that trails off to a tight gap at the bottom of the karmanns doors. 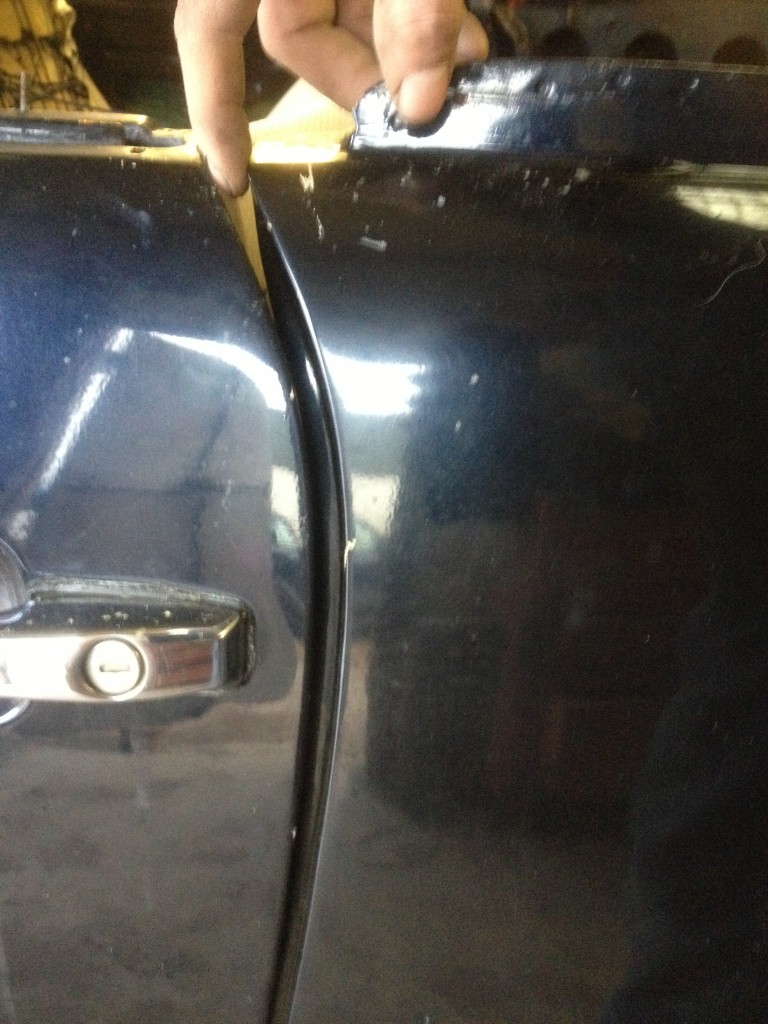 To rectify this the body had to be realigned and where the rear subframe attaches to the body under the seat had rotted and needed welding to strengthen the fixing points.

Once the Karmann Ghia convertible had been realigned and the welding finished the bodywork could commence. 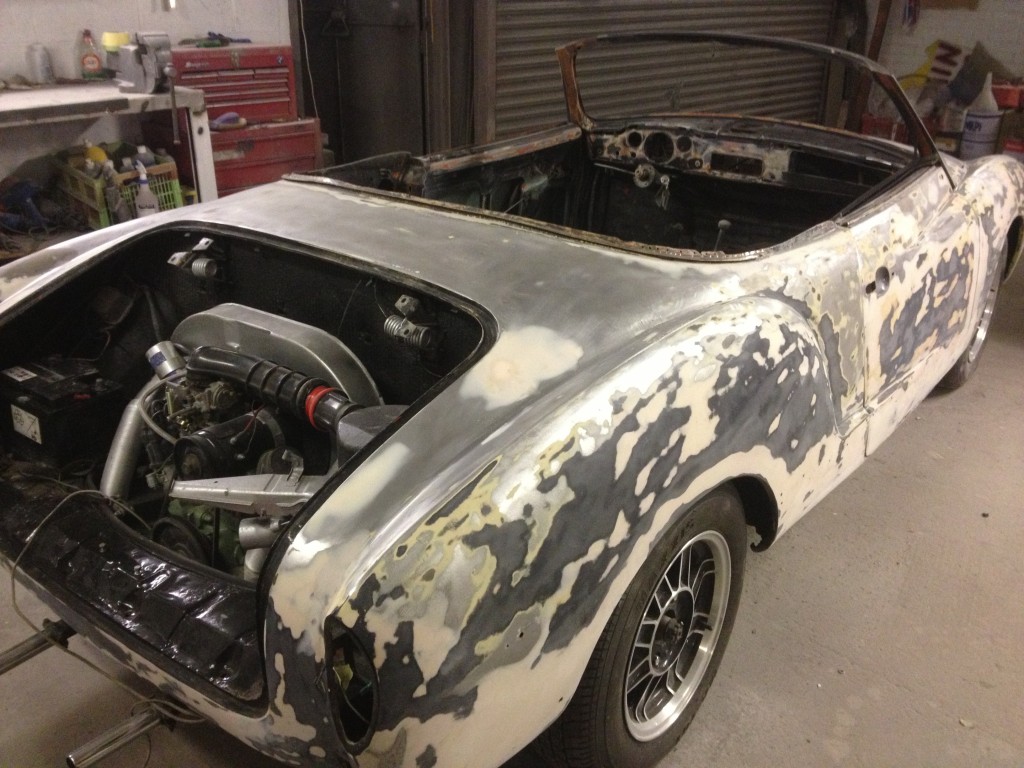 Karmann Ghia being prepared for paint in a partially stripped state.

In the picture above you can see that the Karmann has been bare metal resprayed previously when it was in the states. The Black paint that had been applied was extremely thin and had not protected the body very well causing micro blistering. Patches of filler had been used to repair dents when this job was previously done. The general body condition of this Karmann ghia was surprisingly good in terms of very little significant rot however the body had many small dents and the drivers door had a replacement skin that had been selded over the original causing the lower section of the door to protrude. There was also a significant previous accident damage that had been dubiously repaired from the front wing in to the door skin area. 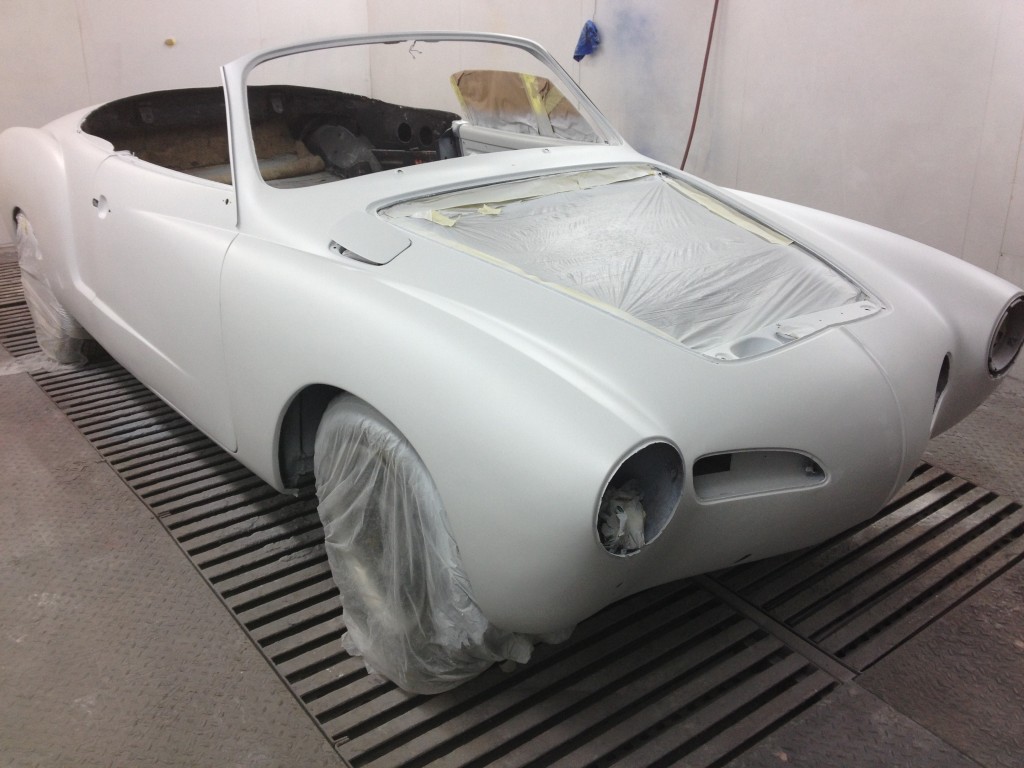 After the Karmann Ghia’s body deformations had been rectified a coat of primer was applied. This helps to show any areas of bodywork that still needs attention before painting. 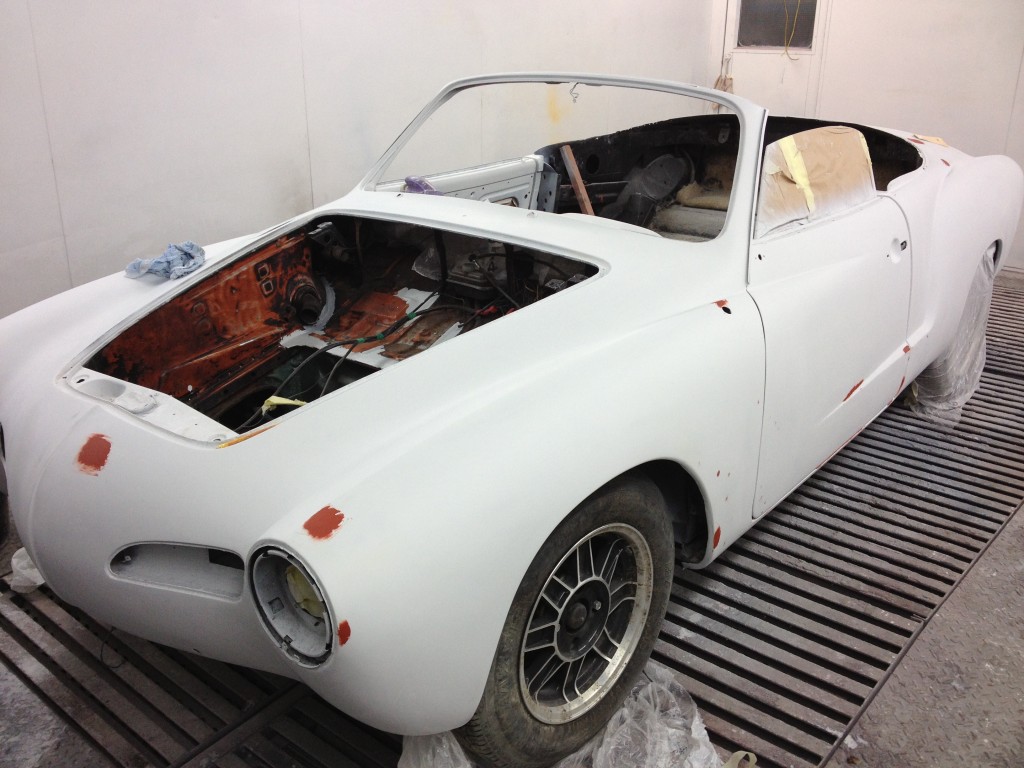 The Ghia was then examined to identify any areas that still required attention and fine filled and reprimed before the entire body is then rubbed down again to provide a smooth blemish free surface for paint application. 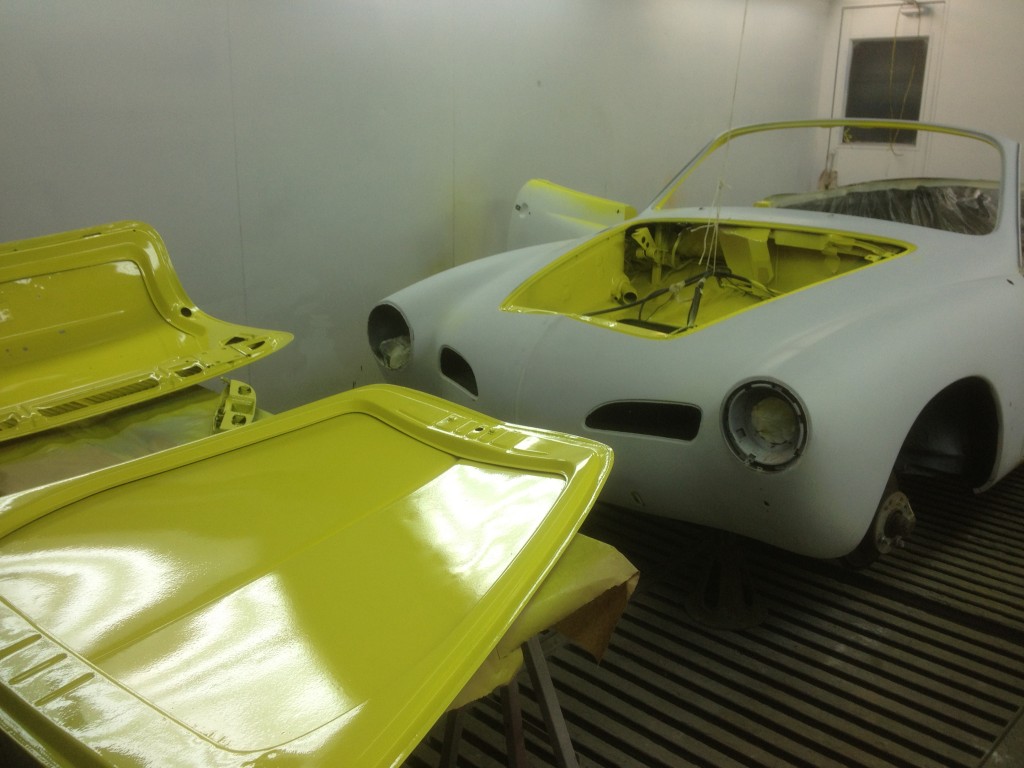 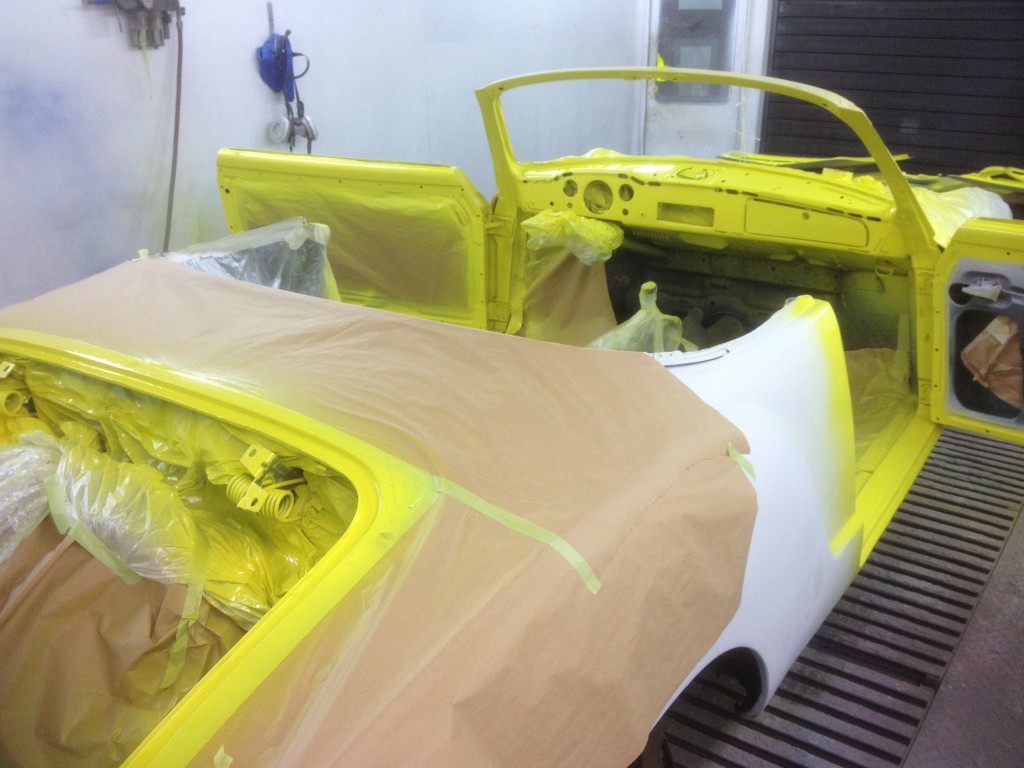 The interior sections of the body work where then primed using the same processes as above and then masked to protect the exterior from overspray. The engine cover and bonnet underside are also painted at this time. 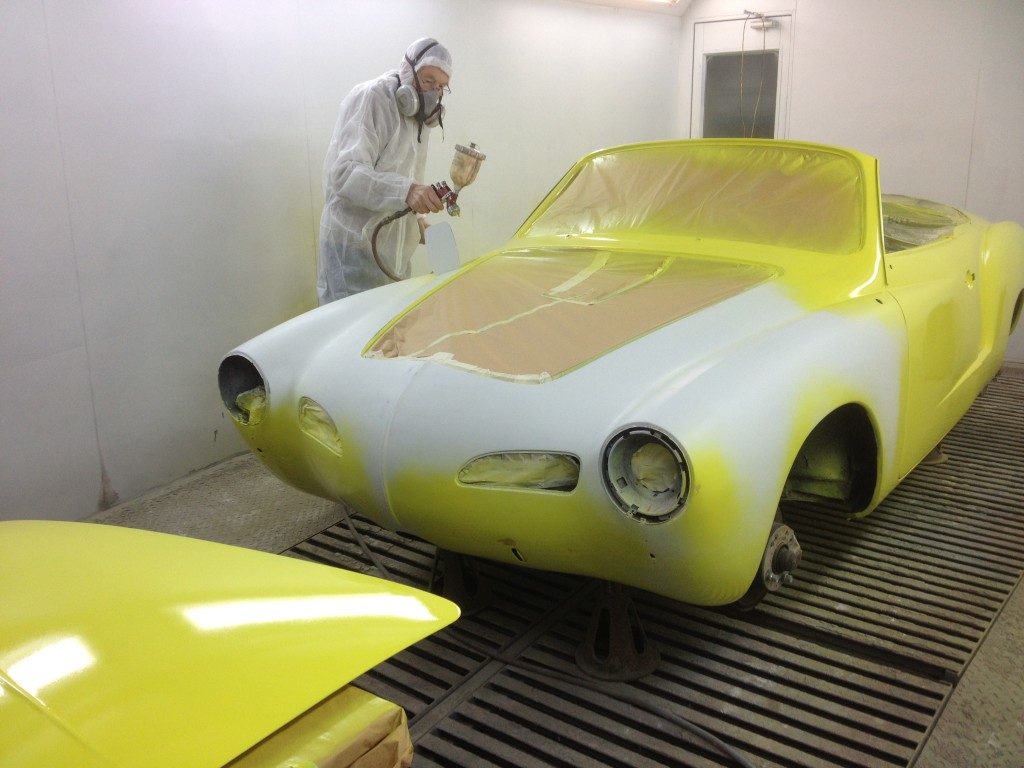 The exterior was then flatted again just to make sure all was good and to remove any over spray and feather any paint edges to provide a seamless join between the internal and external paint applications. 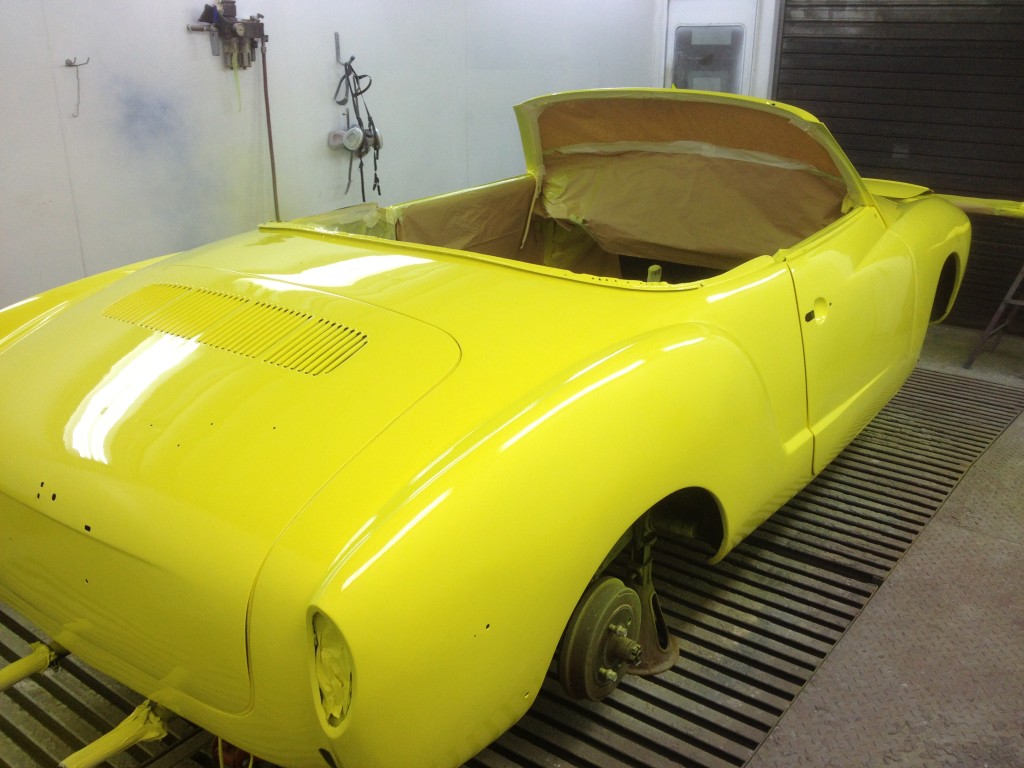 Once painted the exterior is then checked over for any signs of possible reactions and coverage issues that may occur. In this case they was a tiny patch of micro blistering that appeared two days later on the nose cone and on one of the wings. These areas where stripped back to metal again and reprocessed and painted. 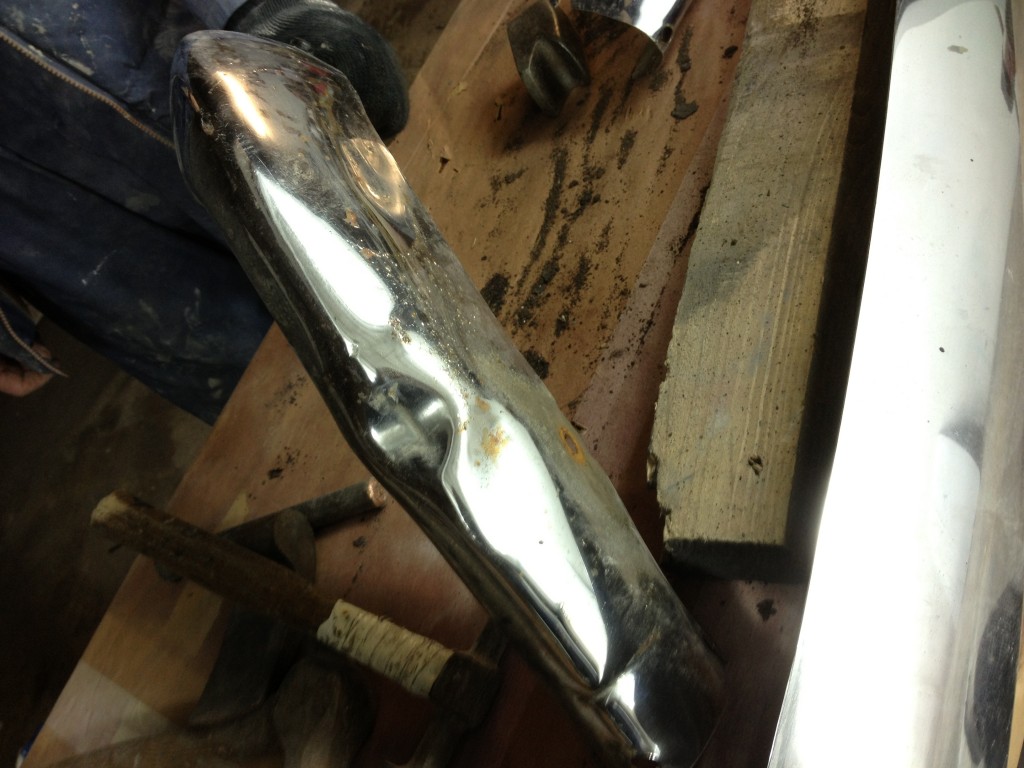 The client wanted the bright work painted black but first the bumpers needed straitening and repairing.Luckily they where to be made in to one piece blade style bumpers so the old original damaged bumpers could be used. 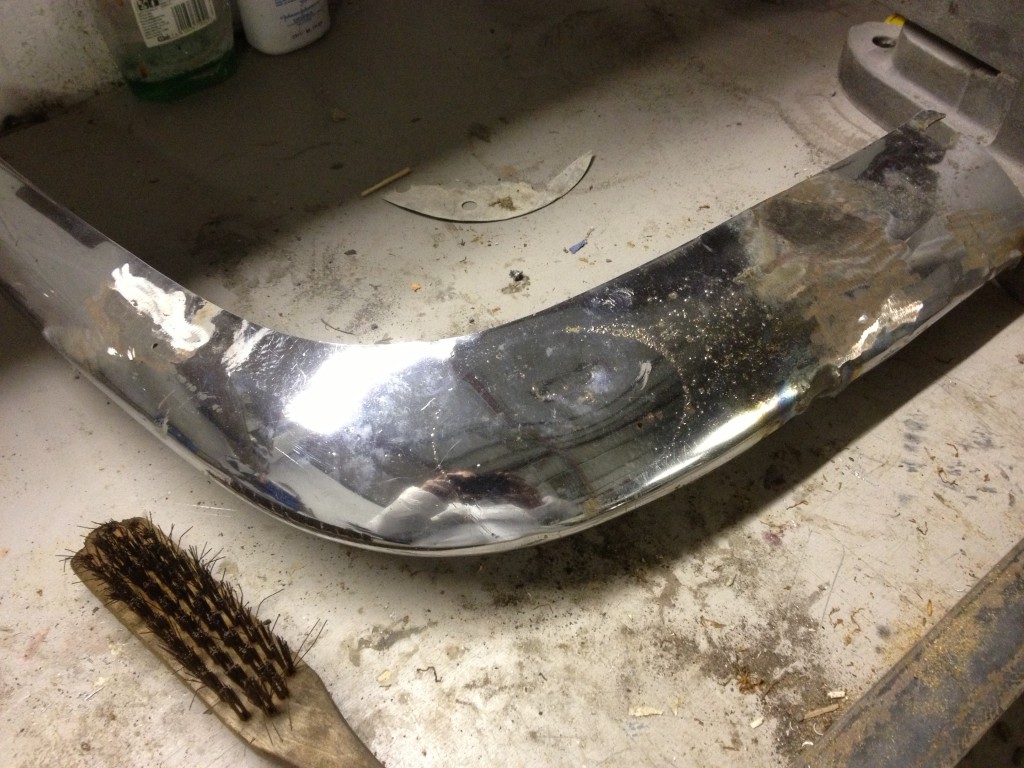 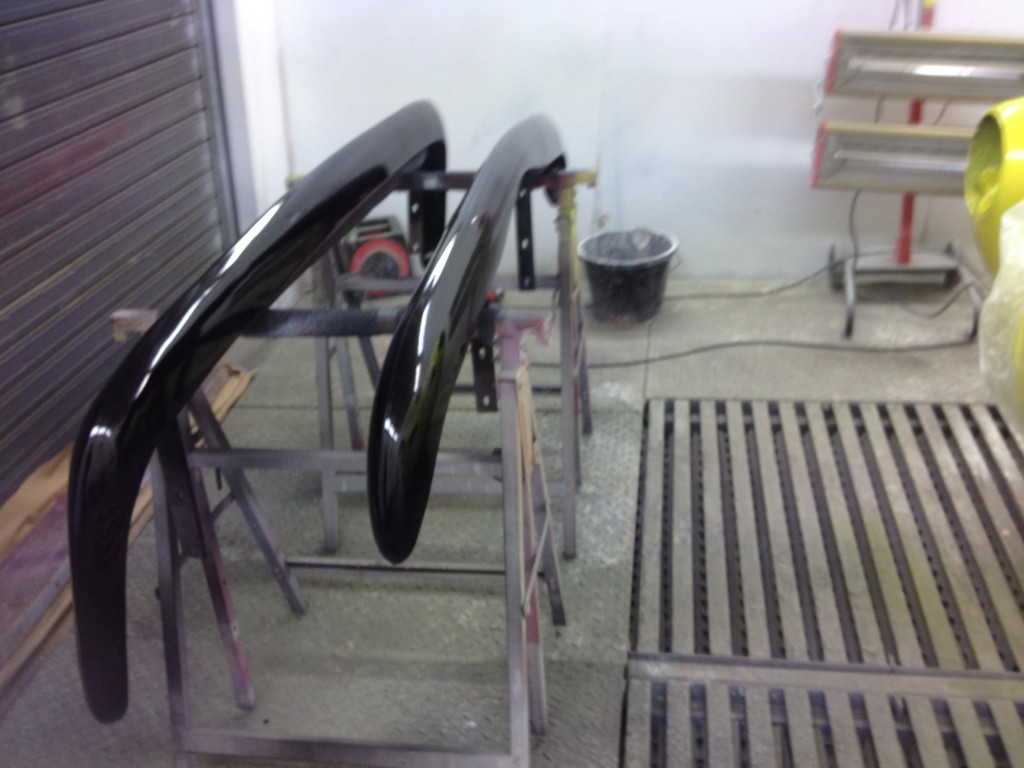 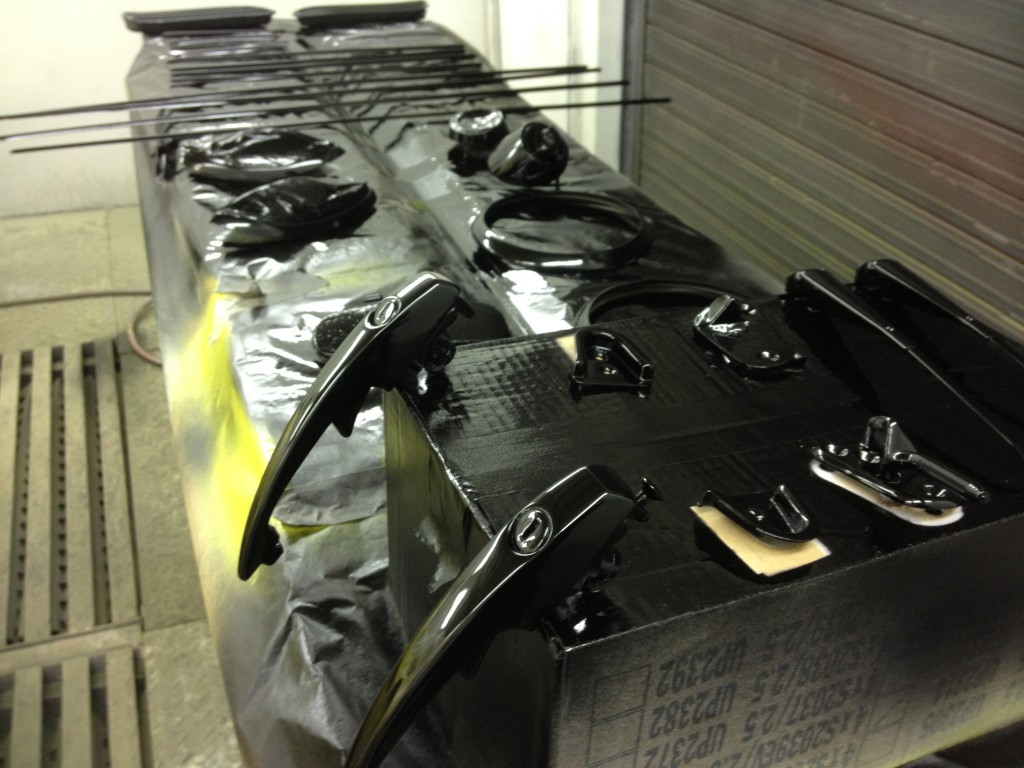 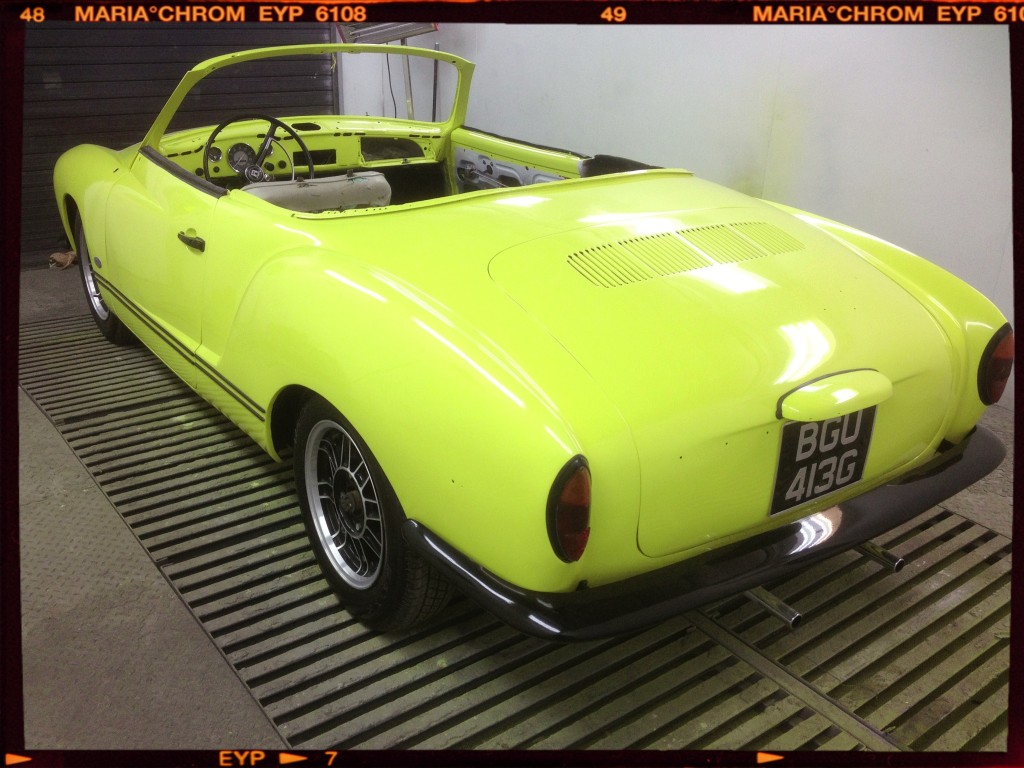 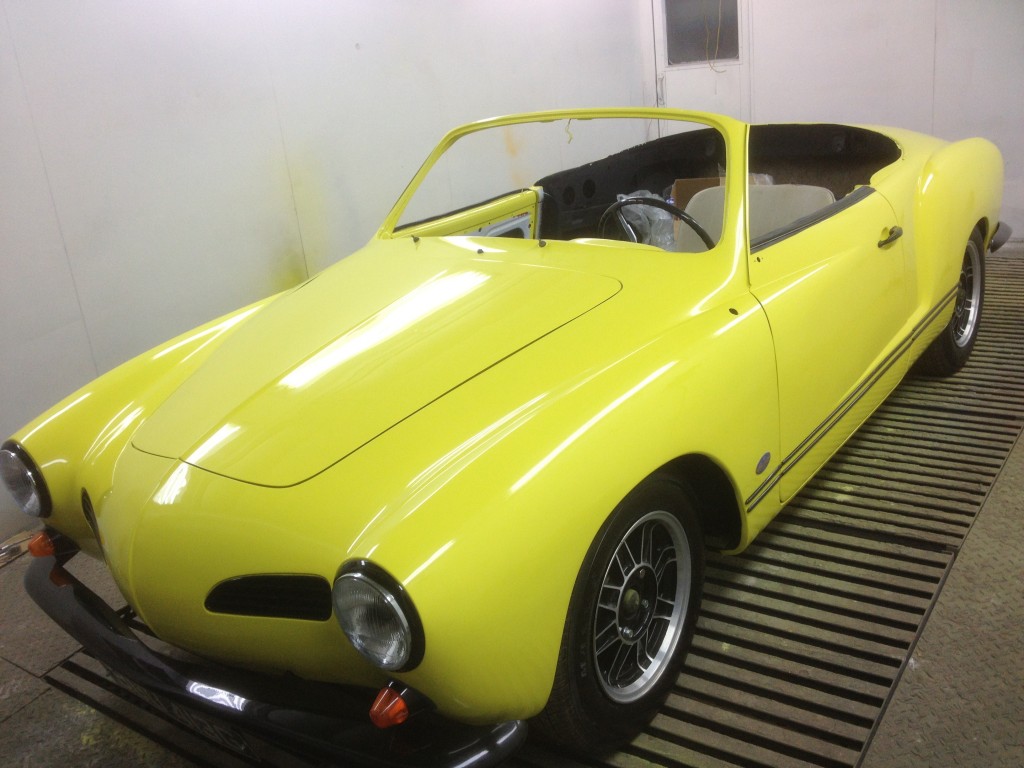