Charlie has bought his Karmann Ghia whilst living in France and and drove it for many years before returning to the UK.

He decided to take the KG of the road and restore it. Over a few years he had collected all the spare/replacement parts that he wanted and had removed the paint very carefully using a DA sander when we went to see the car it was in his fathers garage which was covered in sanded paint dust from the DA sander but nether the less looked like a fairly solid car. 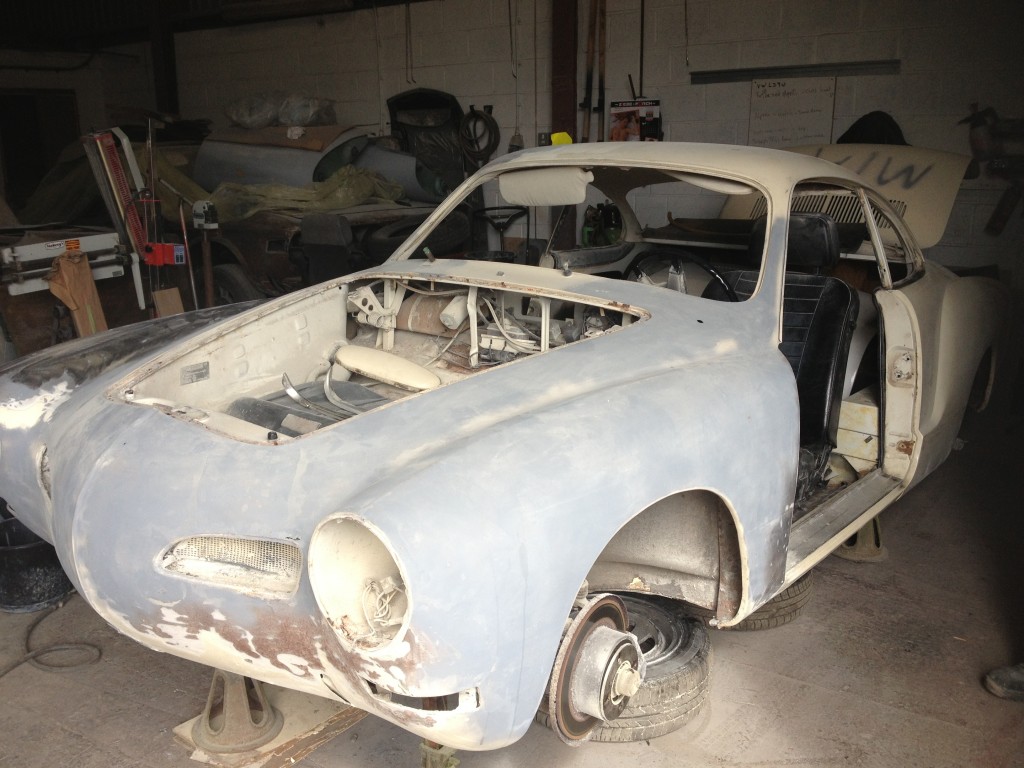 Before starting the welding and panel fabrication work we we noticed something odd about one of he wings. Between the headlight and a the indicator the panel was out of line (see photo). This was a challenge to correct and required us to fabricate a compound curved panel based on the shape of the opposite wing and some guess work. 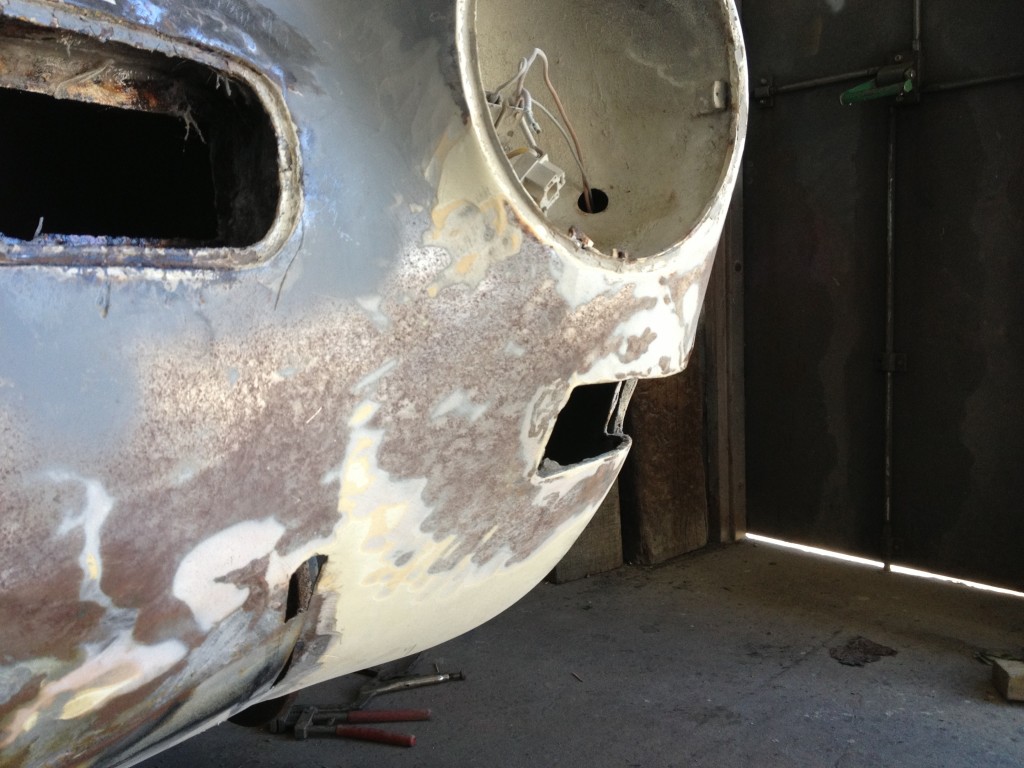 Amongst the panels supplied by Charlie was a new front lower valance to replace the old rotten one so this seemed like the best place to start. 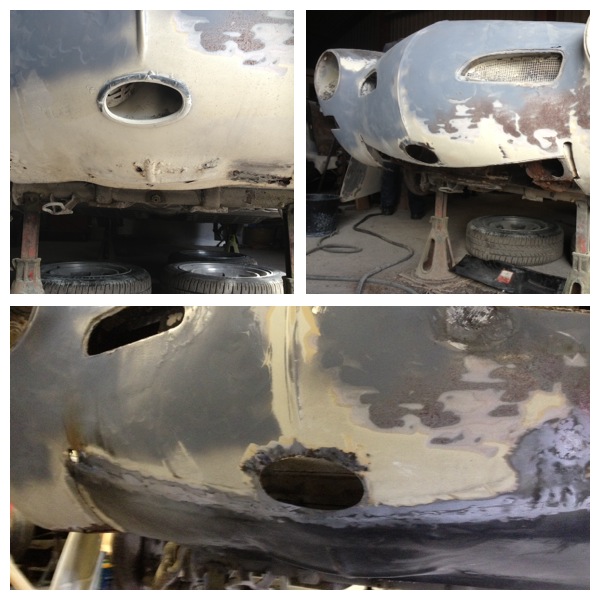 The panel was marked up in position on the car and then the old one was cut away and butt welded in to place along with some smaller weld and lead repair to the Karmann Ghias nose cone.

With the front cone all welded up the next logical repair would be to the cold air channel. There was signs of rot inside the front luggage bay and some obvious holes on the bumper mounts and air intake. Further investigation revealed that the side, bottom and back of the air intake had holes and the inner wing has rotted away too hence the problem in the engine bay and probably the cause of the rotten lower front valance. New parts where fabricated and welded in the seams where then sealed and the interior of the air channels was rust proofed.

Additional welding and panel fabrication included the bonnet rubber channels, front grille/nostrils, Small heater channel repairs rear wing lower quarters, rear engine bay panel (not fabricated by us). The picture below shows the rear engine bay panel removed and replaced and the fabricated Karmann Ghia engine lid fabrication (3 sections made and curved to match the lid profile complete with lips to tuck round and match the original) once the new parts are made we clamp them to the panels and mark them on we then cutaway the rotten area and welded the newly fabricated repair sections in to place. 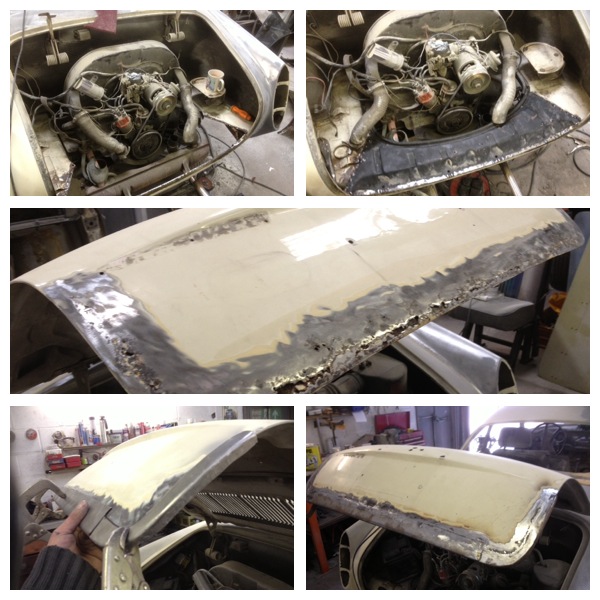 Once the all the welding was completed it was time to move on to the body preparation. first we had an auto electrician remove the wiring loom from the luggage compartment. As you can see over the years this had become quite messy The heater controls, dials, switches fuel tank and washer bottle assembly where next to go. With these out of the way it would be a lot easier to work in the confined space and the final result will be a lot more pleasing. 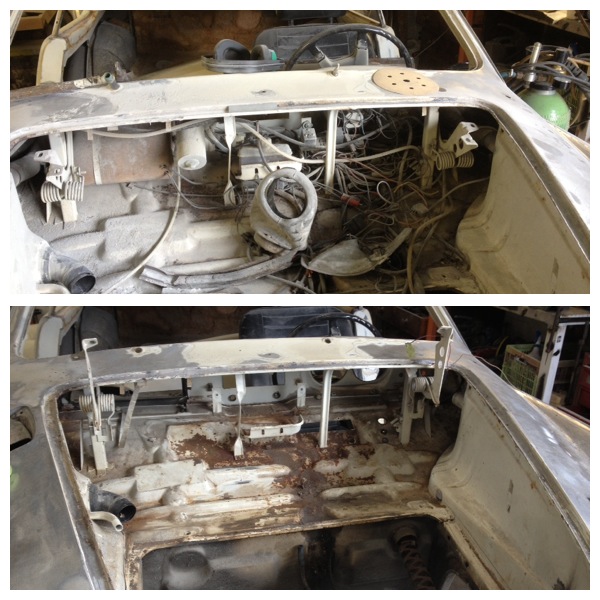 We started the body work off by coating the bare metal with a rust curing agent and then we got the hammers out. Gradually we worked around the body knocking dents out and shrinking high spots before doing some minimal filler work. 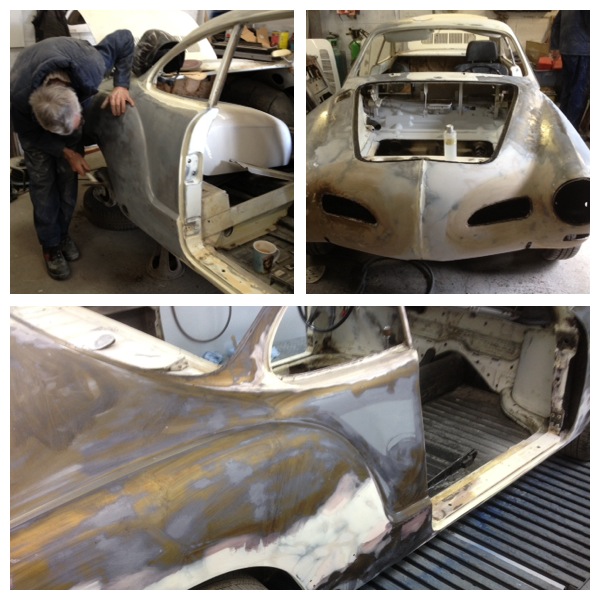 There comes a point in every large restoration / paint job that you can’t see the wood for the trees. so the Karamnn needed to be primed.  This allowed us to see the shapes and  imperfection. 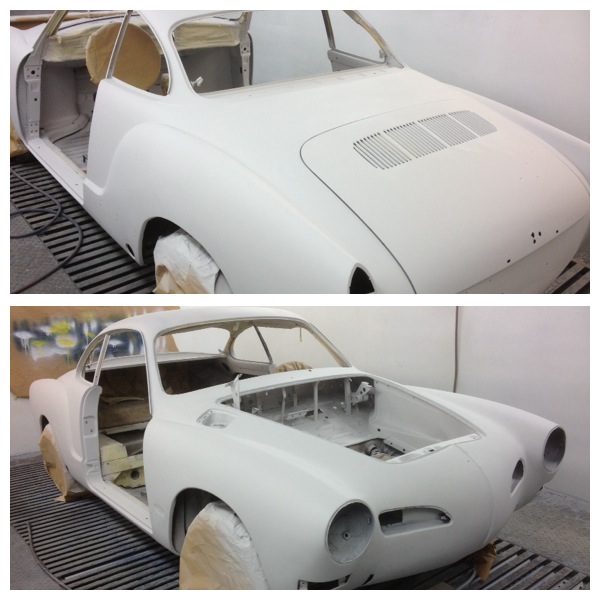 After the initial primer coat  was applied we started the procedure of rubbing down to reveal any problems that may still be in the body work. 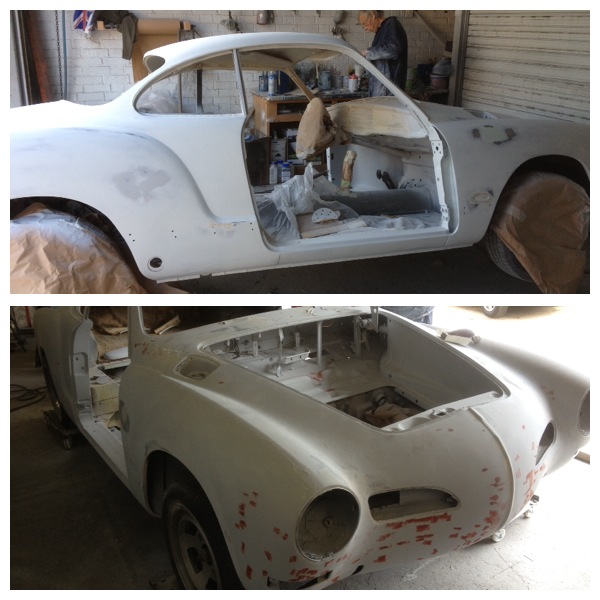 After another week we were ready to apply a final primer coat as the surface for the paint application. once the fresh primer was on another few days of rubbing down commenced.

With the body rubbed down and ready we could apply the BMW silver base coat to the car. We started with the interior and luggage area and then the outer panels. With the base coat on it was time for another check. This time to monitor how the silver had layed on the car. once we where happy we applied the lacquer. The doors and opening panels where all sprayed off the car.

With the car painted and lacquered we began the colour sanding process to remove orange peel.

Unfortunately I did not get a picture of Charlie’s Karmann Ghia with the doors and opening panels fitted  before it was collected, however he has nearly finished the refit and we will have some picture in the near future. 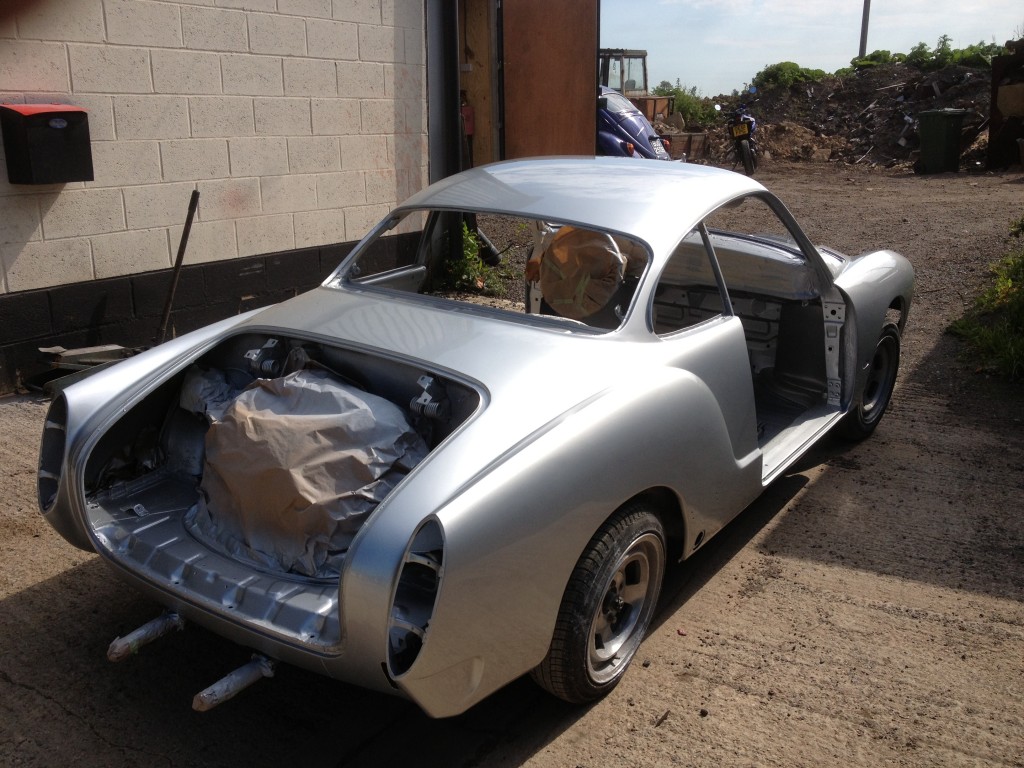 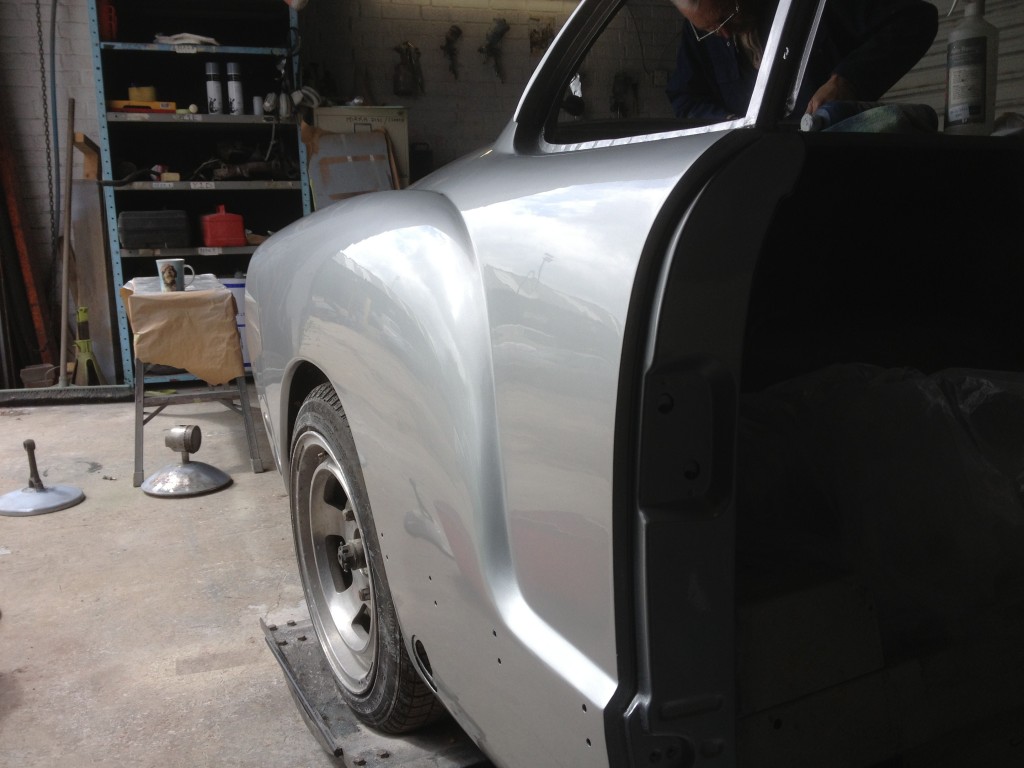 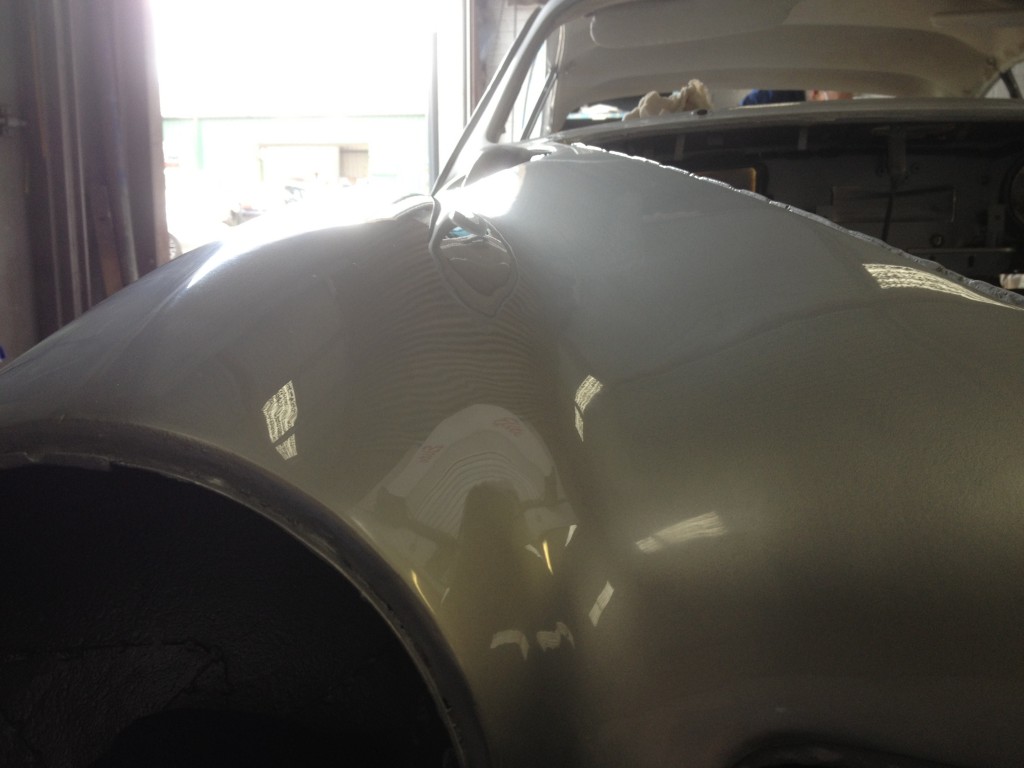 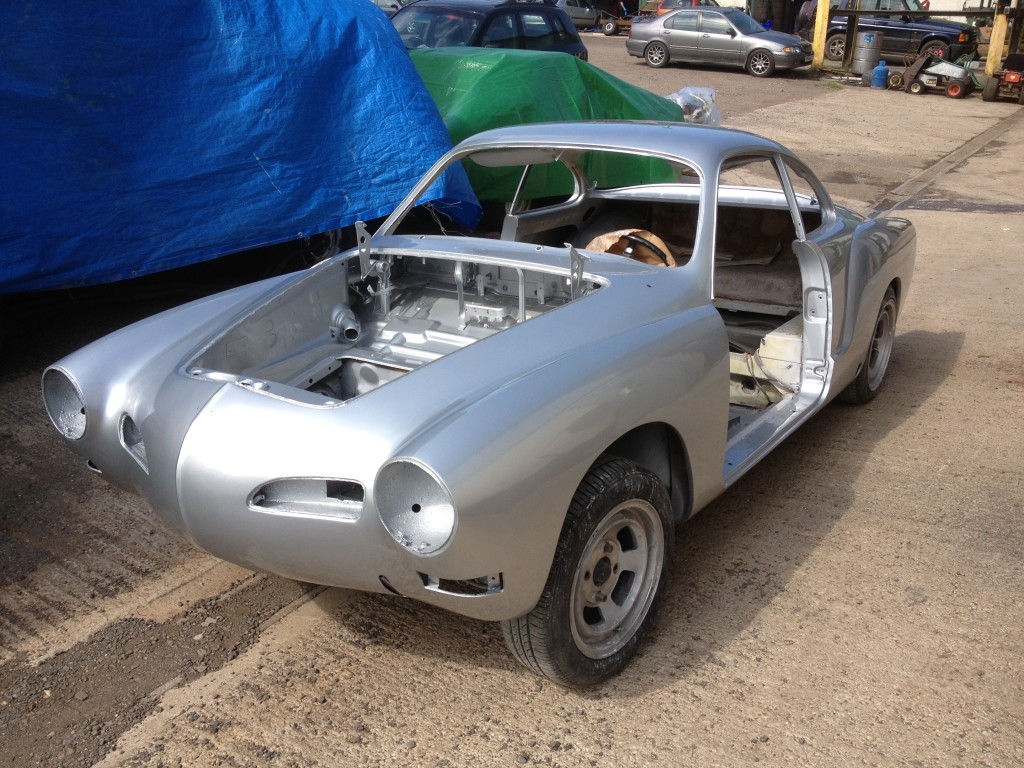